Portugal Day in Trinidad and Tobago

Today’s blog post was written by Jo-Anne S. Ferreira, a Senior Lecturer in Linguistics at the University of the West Indies, St Augustine and a member of SIL International (Americas Area).  Her academic interests are (socio)phonetics, contact linguistics, the history of Portuguese language and culture in the Caribbean, South American French Creole varieties, and Bible Translation. 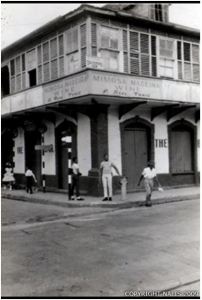 Officially known as Dia de Portugal, de Camões e das Comunidades Portuguesas (“Day of Portugal, Camões, and the Portuguese Communities”), this day commemorates Portuguese nationhood and honours the Portuguese poet Luís Vaz de Camões (Camoens in English), believed to have passed away on 10 June. Camões is the author of Os Lusíadas (The Lusiads in English), the national epic poem lauding the achievements and history of Portugal. Portugal Day was extended to include Portuguese communities around the world after 1974.

The Honorary Consul of Portugal in Trinidad and Tobago, Mr Ignatius S. Ferreira, H.B.M., continues his annual tradition of hosting official cocktail parties in honour of this day. Mr Ferreira has been Honorary Consul since 1985, succeeding José Thiago (JT) Gonsalves. Ferreira was also President of the Associação Portuguesa Primeiro de Dezembro (Portuguese Association) for 30 years, from 1976 to 2006, following Charles Gomes Netto (former Mayor of Arima) and preceding Roger Camacho. Interestingly, the Association is named after the date of Portuguese Restoration, namely, 1 December 1640 when Portugal regained its independence and nationhood after 60 years of being subject to Spain.

Eric Williams, in his 1962 book, The History of the People of Trinidad and Tobago, noted that there were Portuguese present in Spanish Trinidad as early as 1630. Other sporadic emigrations of Portuguese, including Sephardic Jews, were reported to have taken place in the 18th and early 19th centuries.

The Portuguese community of modern Trinidad and Tobago, however, has its roots in the migrations of 1834, just before Abolition, starting with 44 Azoreans arriving on 20 July on the Watchful. Although they were illegal immigrant labourers, these Azoreans, from the island of Faial, heralded the arrival of Portuguese labourers (contract or indentured, depending on the territory) throughout the Caribbean. There are two petitions made to the then Governor of Trinidad in a desperate bid to return home.

Although national historians have noted 1846 as the beginning year of Madeiran immigration to Trinidad, Madeiran historian, Vítor Teixeira, has uncovered archival records of three ships leaving Madeira for Trinidad between 1834 and 1835.  Teixeira notes that the Stralhista left Madeira on 12 November 1834 with 28 passengers bound for Trinidad. The English ship Eweretta left Madeira on 23 November 1834 with 16 ex-prisoners contracted to work in Trinidad. Then on 11 February 1835, the English ship Portland with 32 passengers aboard left for Trinidad.

Based on the above, the Portuguese of Trinidad and Tobago (mostly of Madeiran origin) may be able to mark 1834 as the year of their ancestors’ arrival, 181 years ago, and not the 169 years previously thought (based on well-documented 1846 dates).

Some 2,000 Madeirans arrived in the mid-19th century, with immigration continuing sporadically up to as late as 1975. Almost 1,000 more arrived between 1900 and 1950, with some en route to other destinations such as Curaçao and Aruba (to work in the oil refineries established there in 1918 and 1928, respectively) and Venezuela.

Indeed, Trinidad can claim to be the first to welcome Portuguese immigrant labourers anywhere in the Caribbean. Guyana followed in 1835. The Port of Spain Gazette had a number of interesting reports and articles on the arrival of the Portuguese.

Of interest is that the 1891 Census of Trinidad and Tobago also tells us that “Portuguese nationals from the Cape Verde Islands numbering 172 came on two sailing vessels between 1856 and 1858 and their contracts lasted for five years.”

Neighbouring Venezuela has hundreds of thousands of Madeiran descendants, but their history is far more recent, as is that of the nearby ABC islands. There has been some contact among members of these communities, including discussions of joint celebrations of Portugal Day and Madeira Day.

Another day of significance is Madeira Day, celebrated on 1 July, when Madeira achieved autonomous status (1976). Descendants of Madeirans around the world celebrate Madeira, its history and culture. For the last three years, Madeira has been welcoming Luso-descendants with Madeiran roots to spend a month in Madeira to learn about the history, language, linguistics, literature and culture of this island, an ancestral home to a surprising number in our midst.

Acquires public and private records of enduring value regardless of format. Cares for and preserve records acquired according to international archival standards. Provides guidance and technical advice on the management of public records. Provides secondary storage facilities to Government Ministries, Agencies and Departments for semi-active records. Provides access to information from our holdings through our Reference Facility. Provides advice on the preservation of records, including disaster recovery.
View all posts by national archives →
This entry was posted in Archives. Bookmark the permalink.

1 Response to Portugal Day in Trinidad and Tobago