Sir Ralph Woodford, Governor of Trinidad from 1813-1828 can be credited with creating much of the green spaces that has become synonymous with the city of Port of Spain including Woodford Square, the Botanic Gardens and Queen’s Park Savannah. When Governor Woodford came to Trinidad, he met the destruction of the 1808 fire. Determined to make improvements to Port of Spain, he “gave his personal attention to its enhancement”. One such enhancement was Brunswick Square, now known as Woodford Square. Originally twice the size it is today, Brunswick Square was named after a German regiment from Brunswick. Governor Woodford, his gardeners and engineer Baron Schack planted numerous tress in the square. In 1866 the fountain at the center of the square was donated by Gregor Turnbull, a local merchant. Over the years the square has undergone numerous changes including the installation of railings in 1892 and the bandstand in 1917, the same year it became known as Woodford Square.

The Botanic Gardens was established in 1818 by Governor Woodford. Once known as the Royal Botanic Gardens, it is the oldest Botanic Garden in the West Indies. Owned by the Peschier family, the seventy (70) acres of land was purchased by the Governor on behalf of the Queen. These Gardens have played an instrumental role in the agricultural development of the colony as it was a center for the introduction and distribution of both foreign and indigenous plants, some of which include Balata, Poui and Immortelle. Now maintained for recreational uses, the Botanic Gardens is an attraction for both locals and tourists alike.

Most know the Queen’s Park Savannah for Pan at Carnival time, a place to exercise on mornings and evenings or a place to buy coconut water but how was this place first created? Like the Botanic Gardens, the land used for the Queen’s Park Savannah was once owned by the Peschier family and part of the Paradise Estate. Bought for £6000 by Governor Woodford and the Cabildo, it took £10,363 to clear the land, erect the fence around it and fully make it into the recreational ground that Governor Woodford wanted.

Apart from the creation of parks and squares in Port of Spain, various Forest reserves have been set up to protect the natural environment of Trinidad and Tobago.  The Tobago Main Ridge Forest Reserve is one of “the oldest protected rainforest in the western hemisphere,” since it became a reserve in 1776. It is 9780 acres of tropical rainforest and home to the ocellated gecko which is not found anywhere else in the world. Also considered protected land is the Aripo Savanna which was declared a reserve in 1934 after being recognized as having a unique ecosystem and biological diversity. 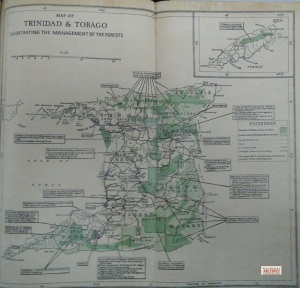 In 1915, the Forest Act was created to manage and protect forests in the country. Throughout the years, this act has been amended numerous times with the most recent amendment taking place in 2013 as protecting the country’s natural environment has become increasingly important in the face of several factors destroying and degrading the natural ecosystems. There are also clubs and associations dedicated to this cause. One such club is the Trinidad and Tobago Field Naturalists’ Club (one of the oldest existing clubs in Trinidad and Tobago).  They are geared towards promoting the environment as their mission is to “Foster education and knowledge on natural history and to encourage and promote activities that would lead to the appreciation, preservation and conservation of our natural heritage.”

Housed at the National Archives of Trinidad and Tobago are several documents that can be used to research the environment in Trinidad and Tobago. These documents include Reference books, copies of the Field Naturalists’ Journals and the Living World Journals, Ordinances and Council Papers.

Ottley, Carlton Robert. The Story of Port of Spain, Capital of Trinidad, West Indies, from the Earliest times to the Present Day. Trinidad: Crusoe Publications, 1962. Print.

This entry was posted in Archives, Archives and the Environment, Students, Teachers. Bookmark the permalink.
%d bloggers like this: